Star Touch was a project we created for Dutch Science centre “Nemo”. The goal of the project was to create an exhibit that was both fun and educational. The team that created the best exhibit won a free year subscription for Nemo. Which my team won!

What is Star Touch

When we started we decided that we wanted to do something using the wii mote and the finger tracking ability. So the idea came to create a game where you had to draw star constallations using your fingers. A constellation showed and blinked for a few seconds then dissapeared and left you with a nice star heaven. The goal was to connect the stars again to recreate the constellation using your fingers as the connect tool. Point one finger at a star and another one at a different star and a line appeared between the stars. When you are done some info about the constellation shows and the top 5 fastest players.

We created a tool to create the constellation files that where needed by the actual program. In the tool you could load a background image and place stars by clicking on the image. Then you could tell it which stars should be connected to form the actual constellation. It saved the files to a custom format which contained the name, description and star positions. 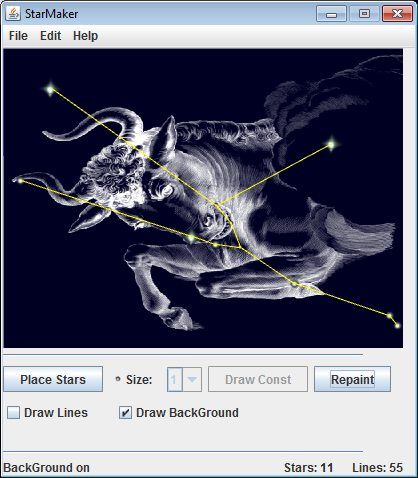