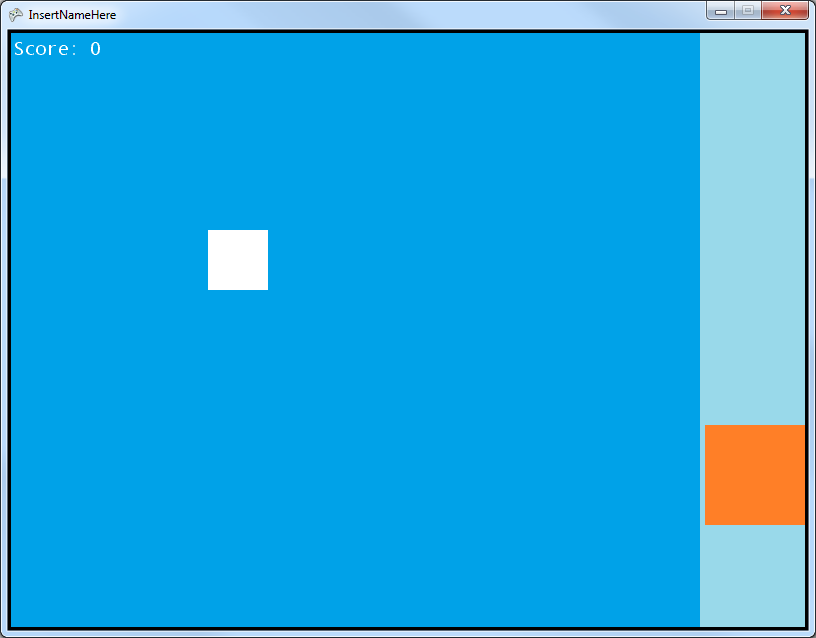 Version 1 was basically a really ugly version where you “controlled” a white block. The orange block moved up and down and shot red blocks at you. You could “catch” those blocks and throw them back. Yep awesome gameplay isn’t it. That’s exactly what I thought. 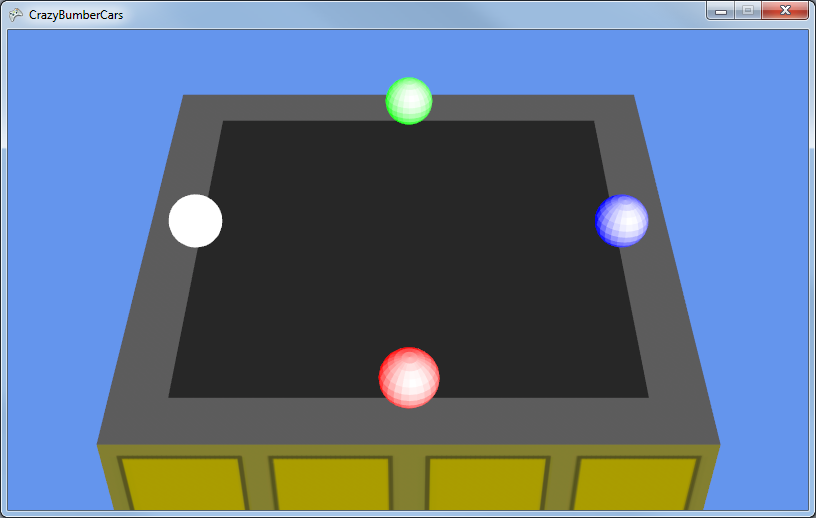 Version 2 is actually a working 3D version of the game! Every player controlled one ball and you could move it around. Bumping eachother of the platform didn’t work really well but everyone who played the game loved it. 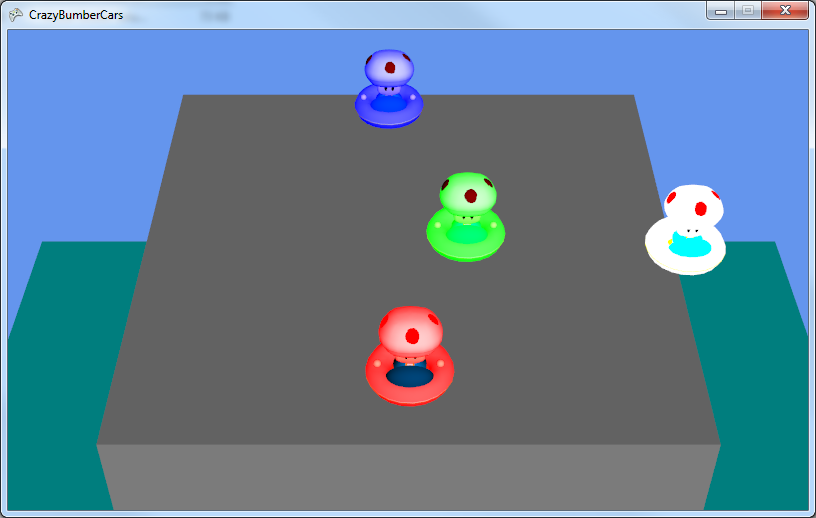 Version 3 Actually contained real 3D models! They didn’t rotate according to the players movement but it’s a nice start.

Oh sorry Nintendo that’s indeed Toad you’re seeing there. Our explanation that he’s included in our game: “After being fired by Nintendo, we got him back on his feet and he’s ready to kick some oldschool Nintendo Ass!”. 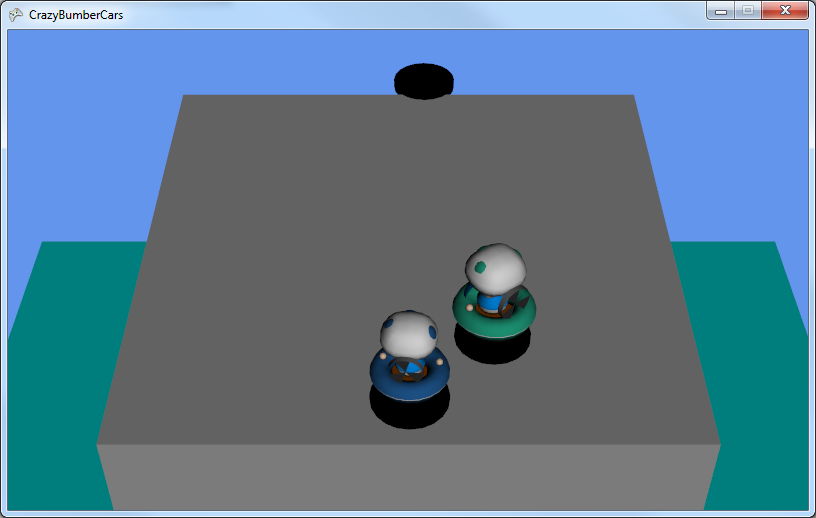 In version 4 we added “Shadows”. It’s bassically a flat model which is placed under the player… Also the players got better colors and are rotating properly now. 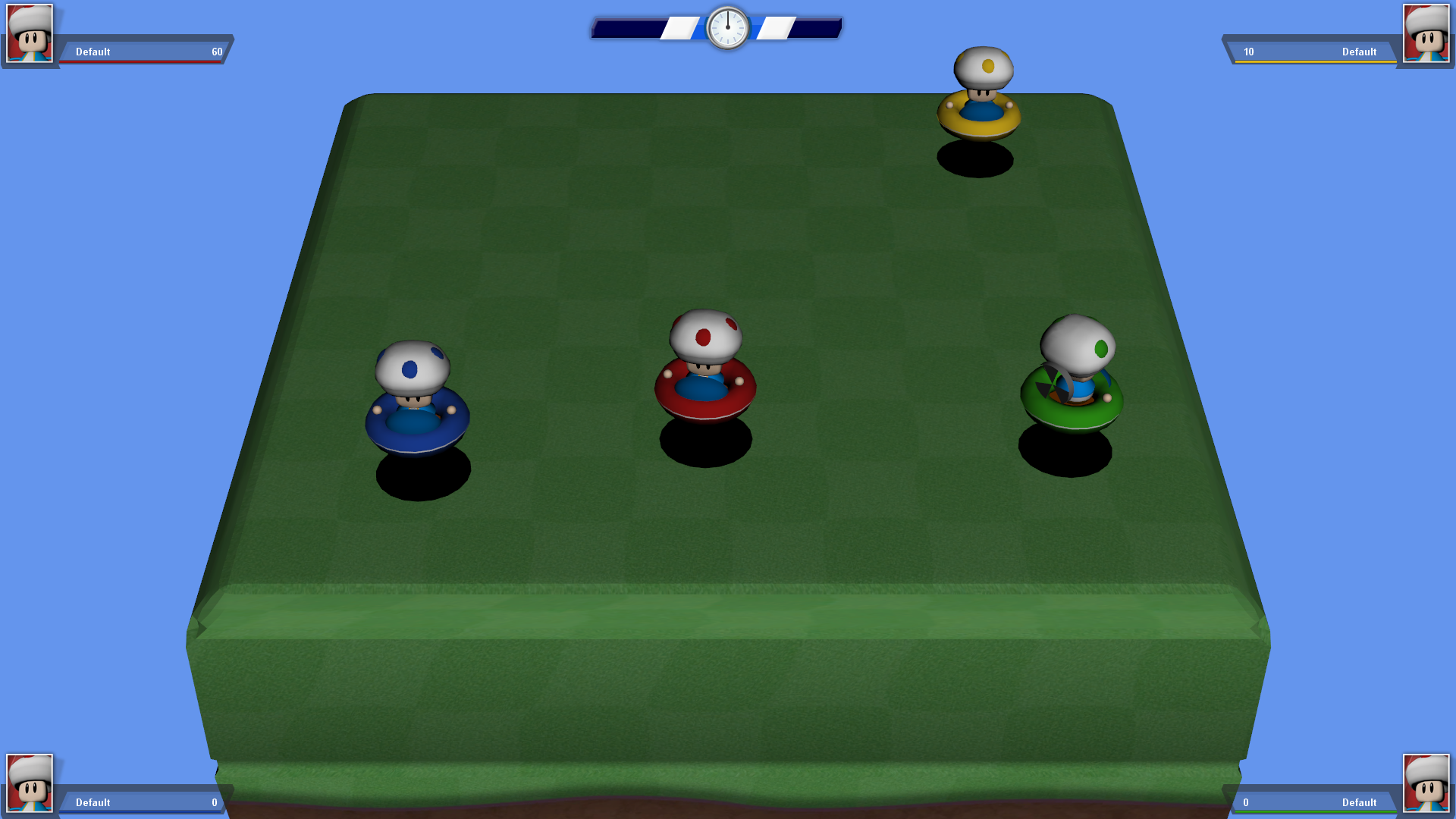 In version 5 we’ve added a basic HUD and we actually kept scores! 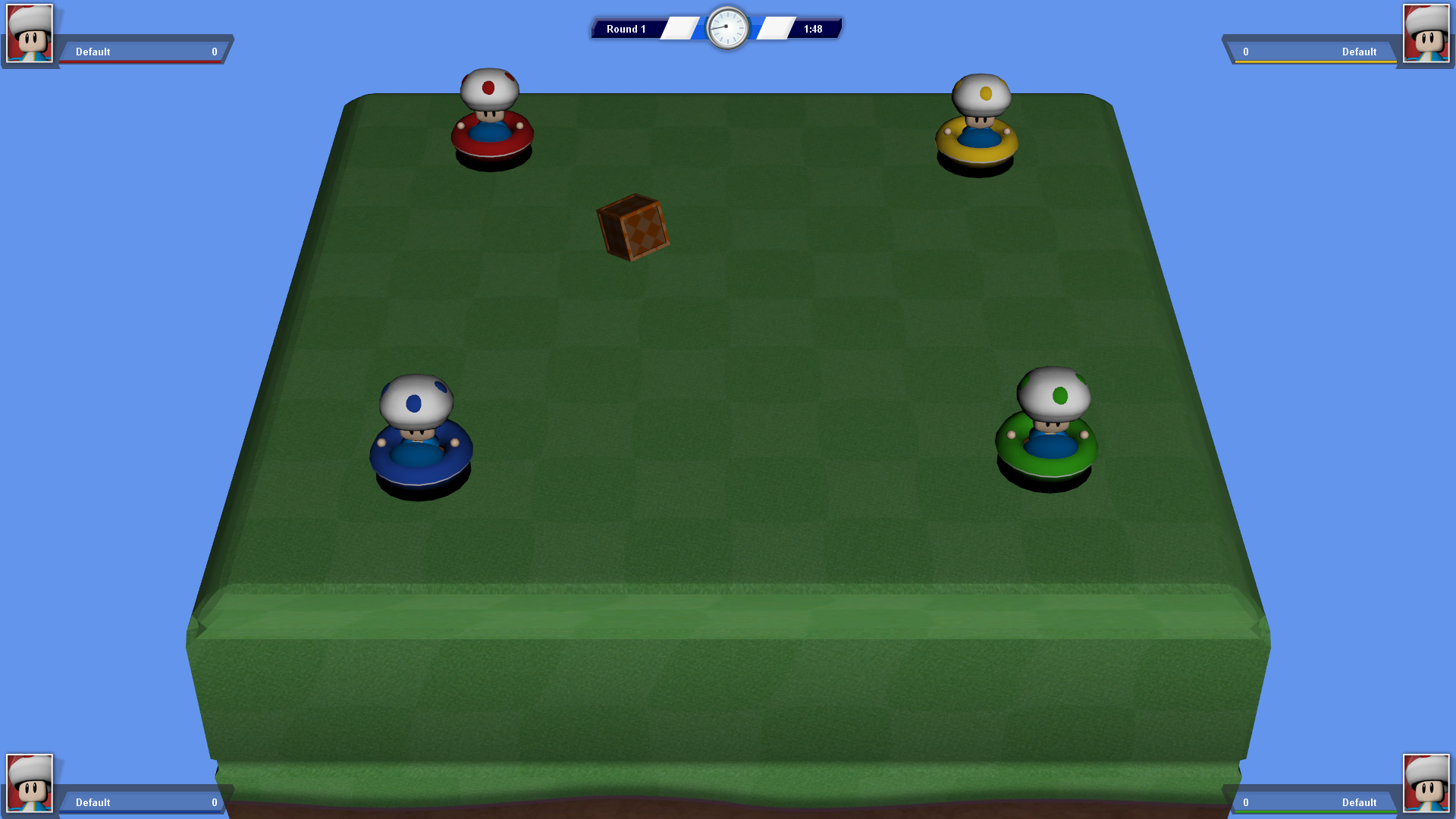 Version 6 introduced pickups. There are 3 kind of pickups.

Jump: Fool your enemy by jumping over them or make them jump over you!

Size: Increase your own size or make your enemy small so you can crush him!

Bomb: The best pickup you can get. You can shoot the bomb or leave it behind, it will throw everyone off the platform!

We’ve added menu’s, an introduction movie and tweaked the gameplay. 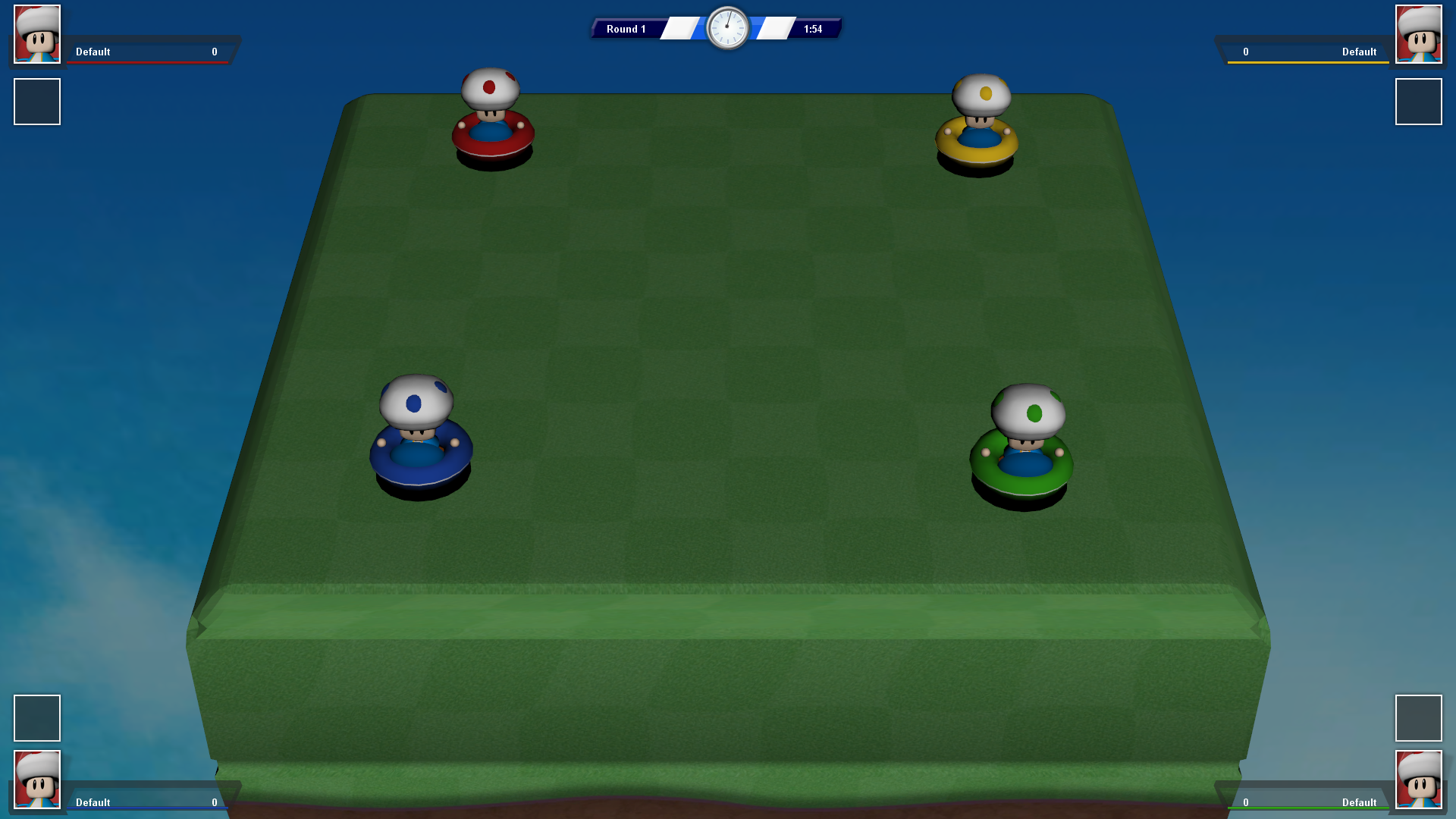 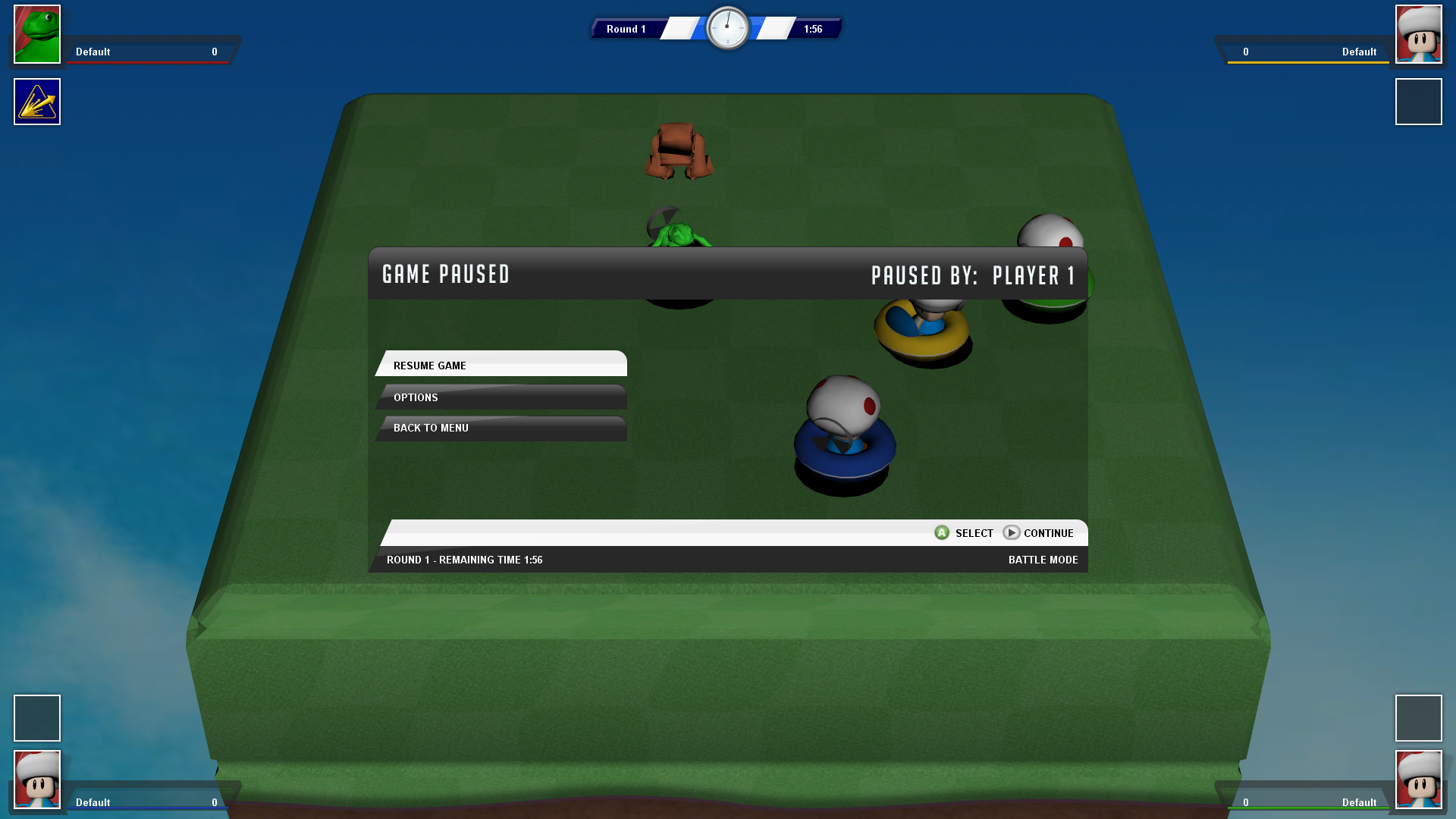 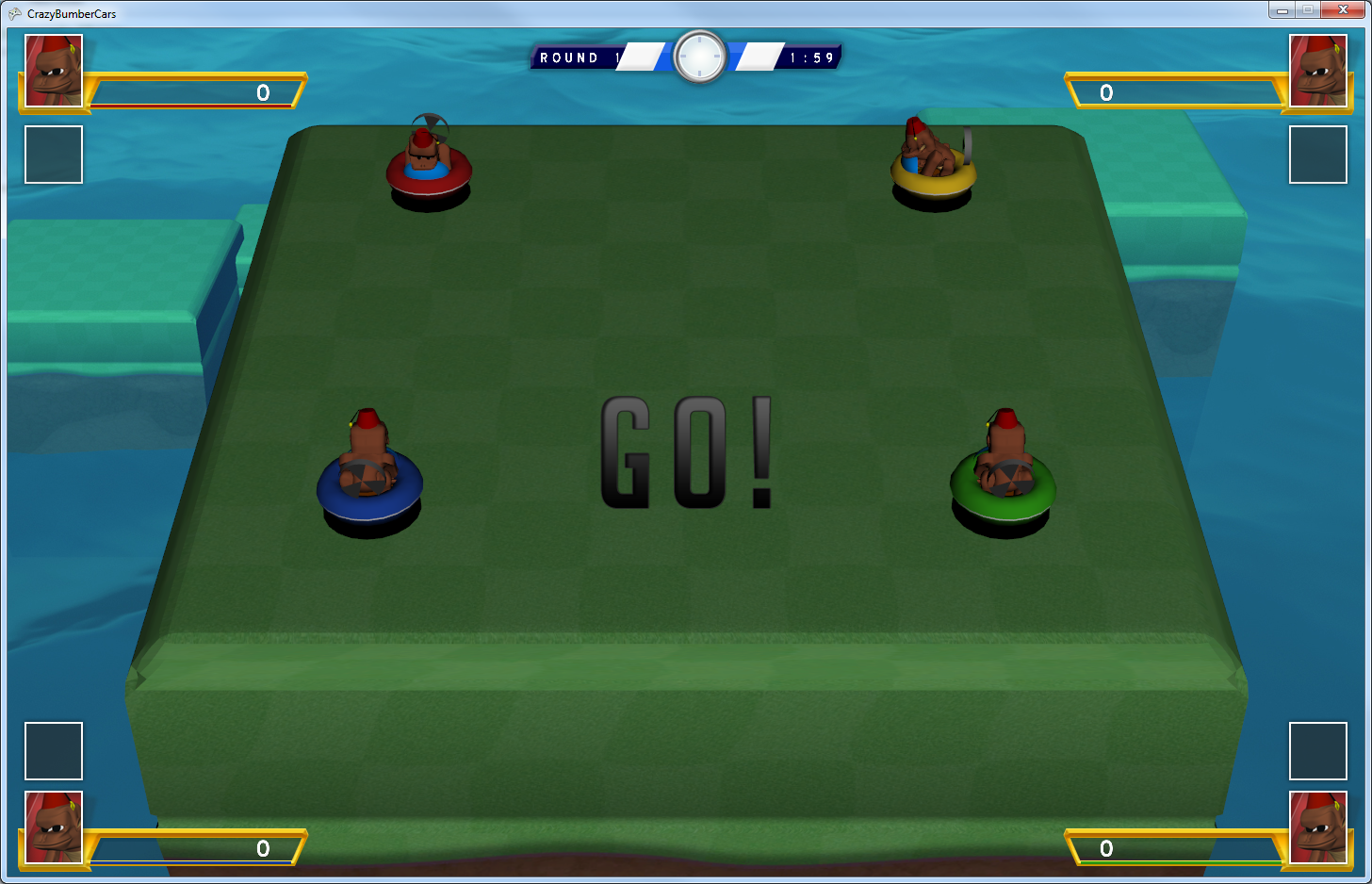 Version 7 got a brand new fake skybox! And a variety of characters, all having their own stats. 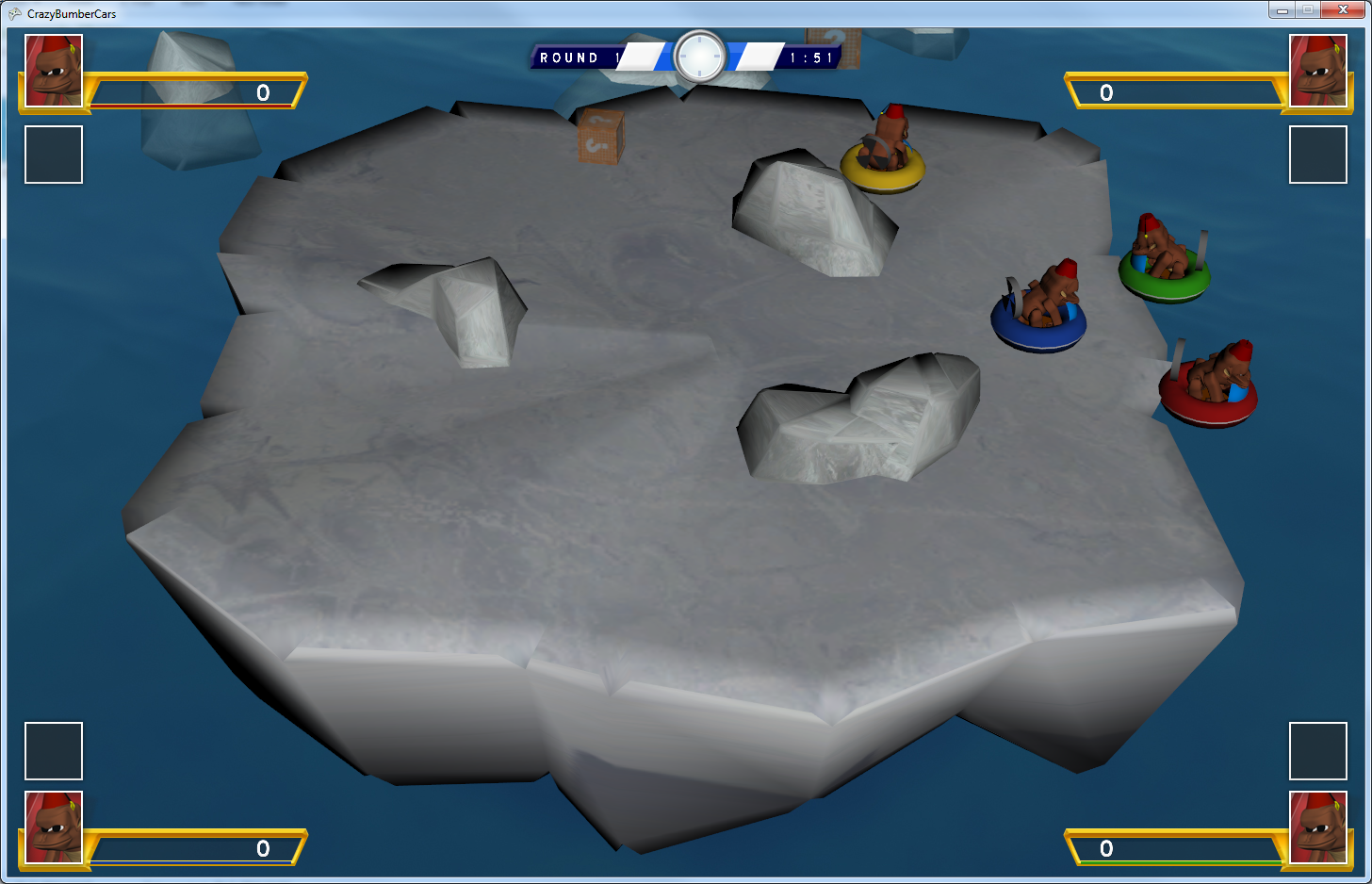 Yep you’re eyes are not lying that’s a brand new map! Ok to be honest it’s really boring and it’s really hard to get someone of the platform. But it looks nice, right? Ofcourse it’s still possible to choose the fun map. 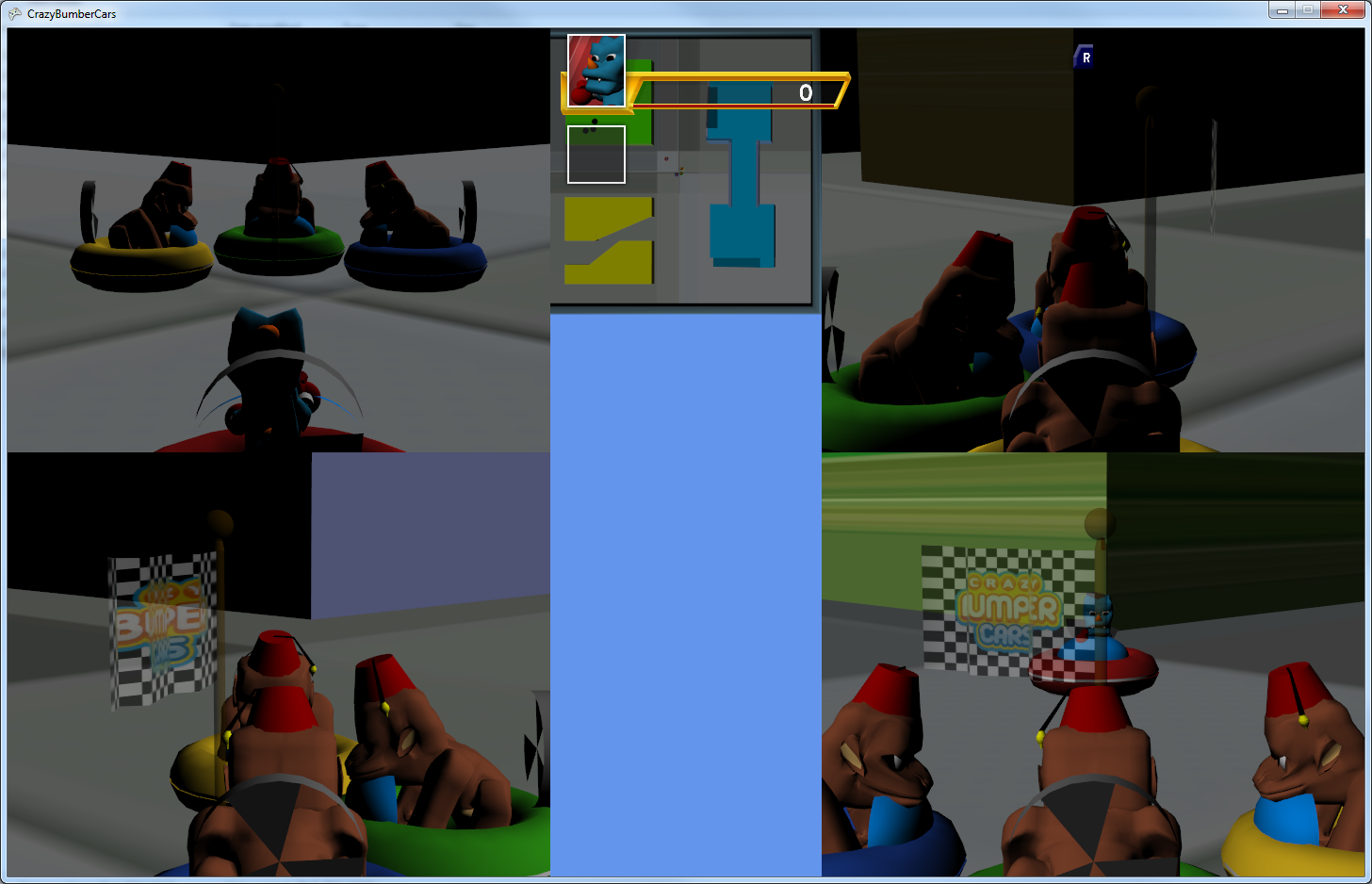 What the hell is that? What happened to your screen.

Well what you see is the first version of a splitscreen game. We planned on adding another gamemode to Crazy Bumper Cars but we needed a different point of view for that. So we added a third person camera, a minimap, splitscreen and a flag. Hold the Flag was born. It looks horrible.. 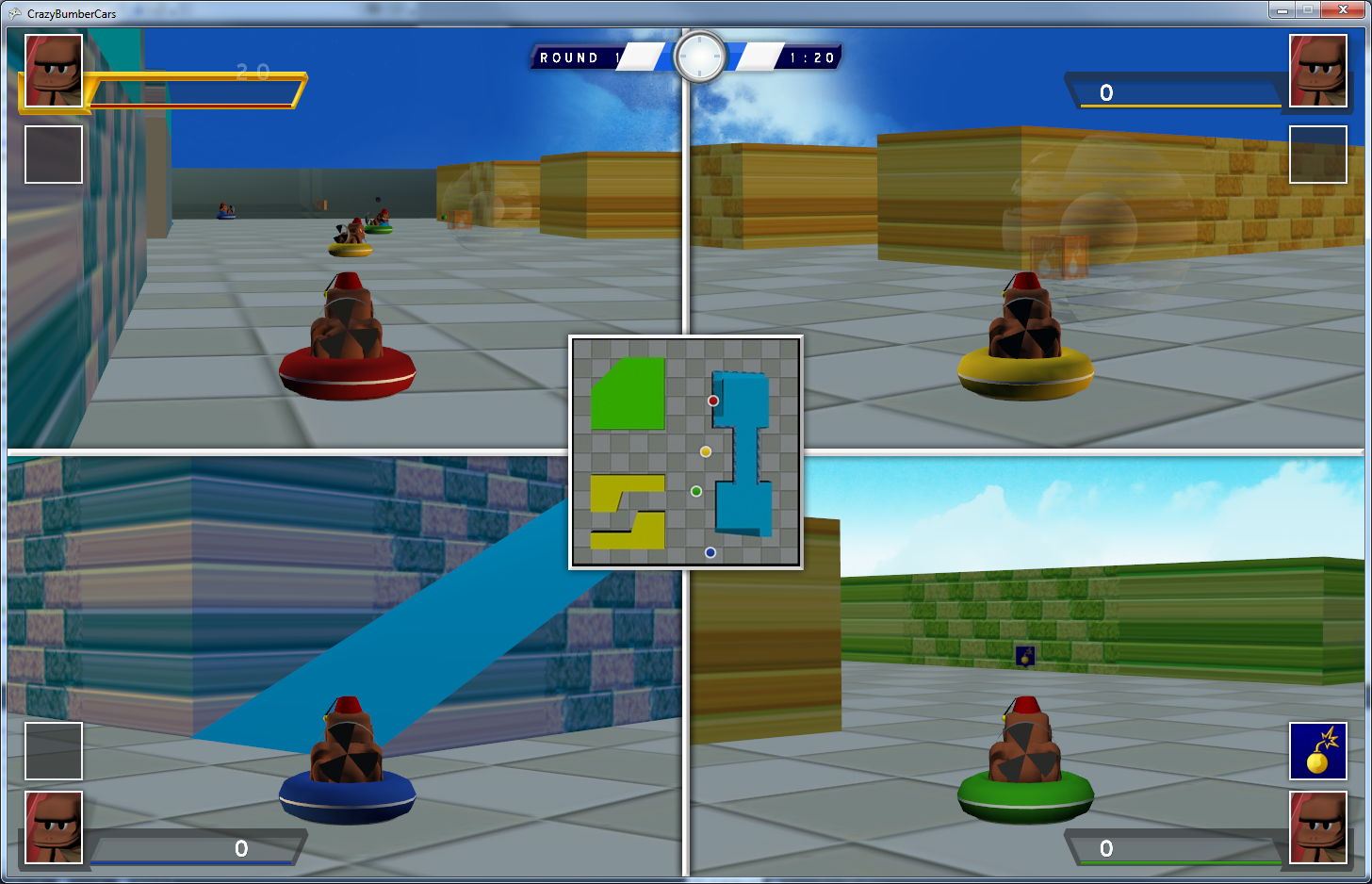 We’ve dumped the Hold the Flag gamemode and decided to go for “Bomb Mania”. A gamemode where you need to throw bombs at your opponents to score points. As you can see splitscreen looks a bit better now, there are still a few UV problems with the map model but we’ll fix it. 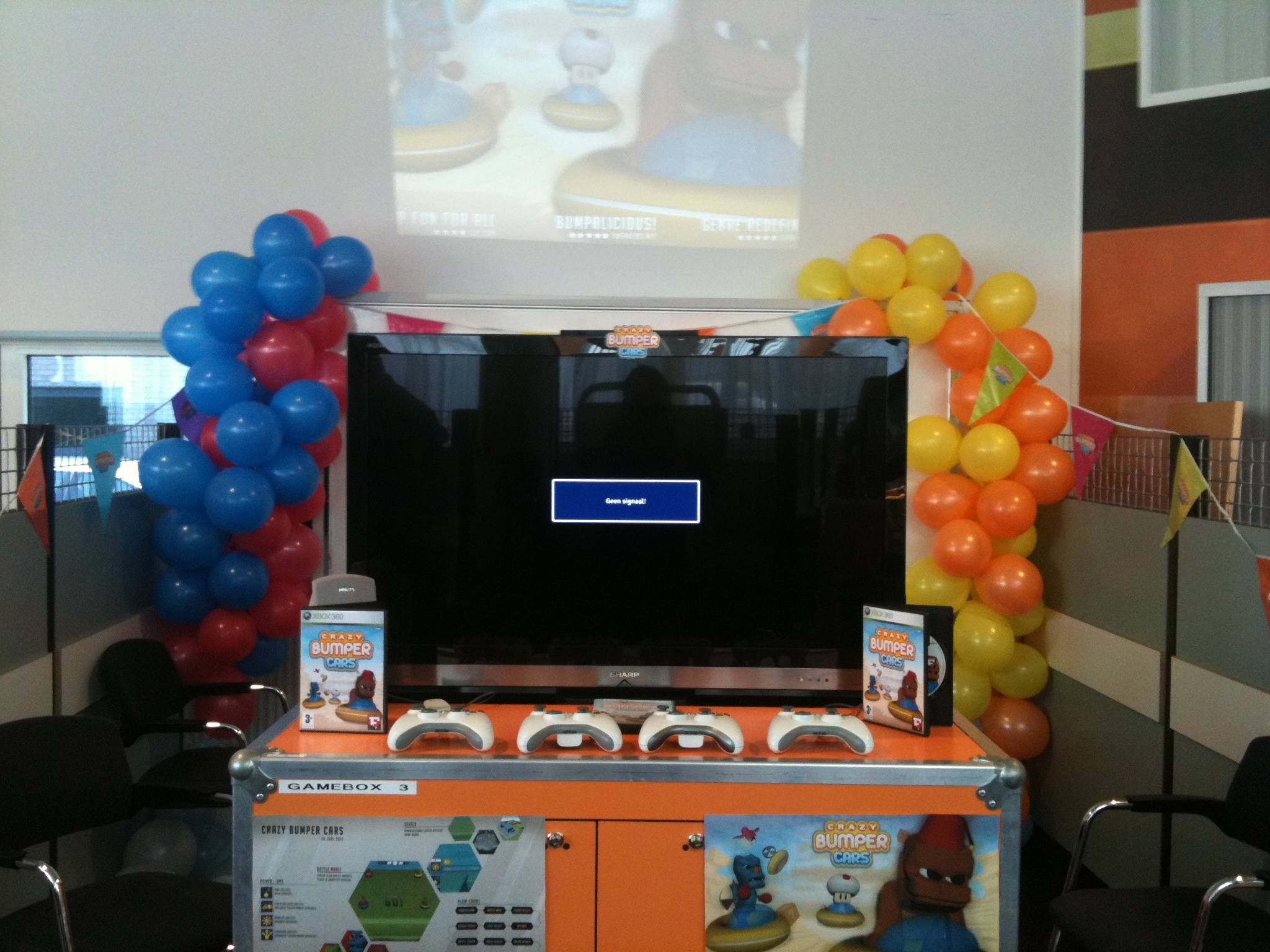